Introduction & Objective: Rheumatoid Arthritis (RA), a systemic disease, is characterized by a chronic inflammatory reaction in the synovium of joints. The inflammation is mediated by inflammatory cytokines. The objective of the study was to evaluate efficacy of homeopathic drugs and changes in the cytokine profile of rheumatoid arthritis patients treated with homeopathic drugs. Materials and Methods: A total of 35 rheumatoid arthritis patients and 10 healthy controls completed this pilot study. The patients were treated with Rhus tox. (8), Pulsatilla (8) and Medorrhinum (9) according to totality of symptoms. The control group (10) received placebo. The patients were evaluated for disease activity at the time of enrollment in the study and after 3 weeks of therapy. Serum cytokine levels (IL-1α, IL-1β, IL-2, IL-6 and TNF-α) were measured at baseline and after 3 weeks of treatment.
Result: Patients receiving Rhus tox. showed significant improvement in Patient Visual Analogue Score (VAS) for global assessment of disease after 3 weeks of therapy compared to placebo group(p = 0.03). Patients receiving Pulsatilla showed a significant improvement in tender joint count (p = 0.01) at the end of 3 weeks compared to baseline. They also showed significant decrease in ESR (p
= 0.02) as compared to placebo. However, hs-CRP values in treatment groups did not show significant difference when compared to the placebo group at baseline and after therapy. There was a significant decrease in IL 6 levels after 3 weeks of therapy in the patients treated with Rhus tox. and Medorrhinum
compared to placebo (p=0.05 and 0.04 respectively). Surprisingly, there was a significant increase in IL 6 level in the placebo group compared to their baseline values (p = 0.04), suggesting ineffectiveness of placebo and worsening of the disease process.
Conclusion: In the present open label placebo controlled pilot study patients treated with 3 weeks of homeopathic drugs showed improvement in clinical features, reduction in parameters of inflammation and IL6 levels. These observations suggest a possible immunomodulatory role of homeopathic drugs in Rheumatoid Arthritis which need to be confirmed by further studies.

Clinical evaluation of homoeopathic therapy in the management of hyperlipoproteinemia

Objectives:This study aimed at evolving a group of useful homoeopathic medicines in the treatment of hyperlipoproteinaemia, to identify their reliable indications, most useful potencies, frequency of administration and relationship with other medicines.
Methods: A prospective observational study was carried out during the period 1992-2003. Three hundred and twenty two patients with hyperlipoproteinaemia and various clinical presentations were studied. Patients of more than 30 years of age, with cholesterol > 200mg/dl, triglycerides > 170mg/dl, LDL > 150mg/dl, VLDL > 50mg/dl and HDL < 35 mg/dl were included in this study. Specificparameters were followed to assess the intensity of complaints and the improvement status.
Homoeopathic medicines were prescribed in different potencies (Q to 10M), basing on the presenting complaints, mental and physical attributes of the patients. The patients were advised to have low calorie diet and regular exercise.
Results: Two hundred ninety three (293) patients were followed up regularly and varying degrees of improvement were observed, viz. marked improvement in 77 patients, moderate improvement in 113 patients, mild improvement in 100 patients and no improvement in 03 patients. Abroma augusta 30, Gelsemium 30, Lycopodium 1M, Bryonia alba 30, Pulsatilla 30, Nux vomica 30 were found to be useful among the other prescribed medicines.
Conclusion: Results obtained from the study are encouraging with findings that 26% of the patients improved markedly with an evidence of changes in laboratory parameters. However, an experiment in controlled setting with improved protocol and clearer outcome parameters is required.
Key words: homoeopathy; observational study; hyperlipoproteinaemia; abroma augusta; gelsemium; lycopodium; bryonia alba; pulsatilla; nux vomica.

Posted by Dr Prabhat Tandon at 3:39 AM 7 comments:

Decreased Intensity of Japanese Encephalitis Virus Infection in Chick Chorioallantoic Membrane Under Influence of Ultradiluted Belladonna Extract. American Journal of Infectious Diseases 6 (2): 24-28, 2010.
The homeopathic remedy Belladonna is effective in preventing Japanese Encephalitis (JE), says a  recent study conducted by the Department of Microbiology at the School of Tropical Medicine in Kolkata, the Department of Clinical and Experimental Pharmacology at the School of Tropical Medicine in Kolkata, the University of Health Sciences in Kolkata, the Department of Pathology and Microbiology in West Bengal, in collaboration with the the Drug Proving Research Centre of the Central Council for Research in Homeopathy (CCRH), and the Government of India in Kolkata, and the Department of AYUSH Ministry of Health in New Delhi.
Read more about research on homeopathy


Abstract: Problem statement: No specific antiviral therapy is currently available despite an emergence and resurgence of Japanese encephalitis in South-East Asian Countries.
There are only few recent studies, which were aimed to treat Japanese encephalitis with newer drugs. There is thus a real need for study on antiviral agents that can reduce the toll of death and neurological sequelae resulting from infection with this virus.
Approach: Optimum dilution of the JE virus was determined which could produce significant number of pocks on Chorioallantoic Membrane (CAM). Then ultradiluted Belladonna preparations were used to see their inhibitory action on JE virus infection in CAM.
Results: Ultradiluted Belladonna showed significantly decreased pock count in CAM in comparison to JE virus control.
Conclusion: Ultradiluted Belladonna could inhibit JE virus infection in CAM, which may be mediated through glycosidase inhibitory role of calystegines present in Belladonna.

Scientists from the Indian Institute of Technology-Bombay (IIT-B) have established that the sweet white pills work on the principle of nanotechnology.
Homeopathic pills—made of naturally occurring metals such as gold and copper-—retain their potency even when diluted to a nanometre or one-billionth of a metre, states the IIT-B research published in the latest issue of Homoeopathy, a peer-reviewed journal published by the reputed Elsevier. IIT-B’s chemical engineering department bought commonly available homoeopathic pills from neigbourhood shops, prepared highly diluted solutions and checked under powerful electron microscopes to find nanoparticles of the original metal.
“Our paper showed that certain highly diluted homoeopathic remedies made from metals still contain measurable amounts of the starting material, even at extreme dilutions of 1 part in 10 raised to 400 (200C),’’ said Dr Jayesh Bellare. His student, Prashant Chikramane, presented the paper ‘Extreme homoeopathic dilutions retain starting materials: A nanoparticulate perspective’, as part of his doctoral thesis. IIT theory proves what some homoeopaths have always known
Homoeopathy was established in the late 18th century by German physician Samuel Hahnemann. While it is widely popular in certain countries, especially India, the British Medical Association and the British parliament have in recent times questioned homoeopathy’s potency. Around four years ago, British research papers rubbished homoeopathy as a mere “placebo’’.
“Homoeopathy has been a conundrum for modern medicine. Its practitioners maintained that homeopathic pills got more potent on dilution, but they could never explain the mechanism scientifically enough for the modern scientists,’’ said Bellare. For instance, if an ink-filler loaded with red ink is introduced into the Powai lake, Bellare said, there would be no chance of ever tracing it. “But the fact is that homoeopathic pills have worked in extreme dilutions and its practitioners have been able to cure tough medical conditions,” he added.
“We had analyzed ayurvedic bhasmas a few years ago and found nanoparticles to be the powering agent ,” the team members said. For the first time, scientists used equipment like transmission electron microscope, electron diffraction and emission spectroscopy to map physical entities in extremely dilution. They could measure nanoparticles of gold and copper (the original metal used in the medicines).
American homoeopaths—Dr Joh Ives from Samueli Institute in Virginia and Joyce C Fryce from the Centre of Integrative Medicine, University of Maryland—said, “We are all familiar with the simple calculations showing that a series of 1:99 dilutions done sequentially will produce a significant dilution of the starting material in very short order,” they wrote in a special editorial in the journal. But as dilution increases, this theory goes awry. “(But) Chikramane et al found that, contrary to our arithmetic, there are nanogram quantities of the starting material still present in these ‘high potency’ remedies.’’
The hypothesis is that nanobubbles form on the surface of the highly diluted mixtures and float to the surface, retaining the original potency. “We believe we have cracked the homoeopathy conundrum,’’ said Bellare. According to homoeopath Dr Farokh J Master, the IIT theory has proven something what practitioners have always known. “My instruction to my patients has always been to dilute the pills in water and stir it 10 times with a spoon. Then remove the spoon , dip it in another cup of water and stir 10 times. I advise my patients to do this in five cups before discarding the first four cups and then drinking the fifth cup in two equal doses,’’ said Master.
MEDICAL FACTS
FOR...
Homeopathy works on the principles of nano-particles, say IIT-B's department of chemical engineering team
Using state-of-the art techniques, they could find particles of the original element as small as one-billionth of a metre
The hypothesis is that a nanoparticle-nanobubble rises to the surface of the diluted solution; it is this 1% of the top layer that is collected and further diluted. So, the concentration remains
AGAINST...
Homeopathy is merely a placebo, said a meta-analyses published in the Lancet in 2005.
The British Medical Association said that homeopathy had no scientific basis; dub it witchcraft
Many National Health Services in the UK excluded homeopathy from their purview.

Modulation of arthritis in rats by Toxicodendron pubescens and its homeopathic dilutions. 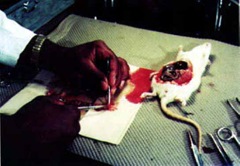 Modulation of arthritis in rats by Toxicodendron pubescens and its homeopathic dilutions.

We assessed the severity of arthritis through observations including inflammatory lesions, body and organ weight and hematological parameters including C-reactive protein (CRP). Blinded radiological analysis of the affected joints and pain intensity determination was also carried out.

This study supports claims in the homeopathic literature on the role of Rhus tox and its ultra dilutions in the treatment of arthritis and associated pain. Further study is needed to explain this anti-arthritic effect of Rhus tox.

Posted by Dr Prabhat Tandon at 5:27 AM 2 comments:

Launch of CAM-QuestDatabase
The Carstens Foundation in Germany has recently launched an excellent online database of clinica lresearch in CAM. Studies in nine different therapies have been included: acupuncture, anthroposophic medicine, ayurveda, bioenergetics, herbal medicine, homeopathy, manual medicine, mind-body medicine and TCM.
The database includes a large number of German homeopathic case reports and provides the facility to perform searches by disease, therapy and study design. The ‘quick search’ function provides a synopsis of studies using the most common therapies for the most common diseases whilst the ‘expert search’ function enables a detailed, comprehensive search across the CAM therapies and full range of diseases within the database.
At present the database is available in English, French, Dutch and German, but there are plans to translate it into all European languages. It is accessible free of charge at  http://www.cam-quest.org
First Homeopathic Veterinary Database (VetCR)
The first database of clinical research in veterinary homeopathy is now accessible online. Containing all available literature on original veterinary studies it provides access to approximately 200 entries of randomised clinical trials, non-randomised clinical trials, observational studies, drug provings, case reports and case series.
Produced by the Carstens Foundation, the database is freely available at [ http://www.carstens-stiftung.de/clinresvet/index.php

We prospectively studied the clinical efficacy of an alternative cancer treatment “Psorinum Therapy” in treating stomach, gall bladder, pancreatic and liver cancers. Our study was observational, open level and single arm. The participants' eligibility criteria included histopathology/cytopathology confirmation of malignancy, inoperable tumor, and no prior chemotherapy or radiation therapy. The primary outcome measures of the study were (i) to assess the radiological tumor response (ii) to find out how many participants survived at least 1 year, 2 years, 3 years, 4 years and finally 5 years after the beginning of the study considering each type of cancer. Psorinum-6x was administered orally to all the participants up to 0.02 ml/Kg body weight as a single dose in empty stomach per day for 2 years along with allopathic and homeopathic supportive cares. 158 participants (42 of stomach, 40 of gall bladder, 44 of pancreatic, 32 of liver) were included in the final analysis of the study. Complete tumor response occurred in 28 (17.72%) cases and partial tumor response occurred in 56 (35.44%) cases. Double-blind randomized controlled clinical trial should be conducted for further scientific exploration of this alternative cancer treatment.